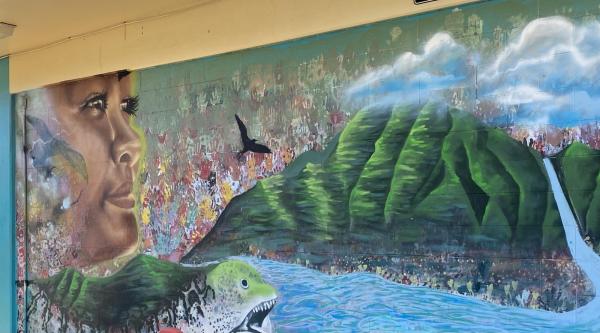 So… I am here. I have accomplished about nine interviews in the span of four days and have another seven on deck before I leave. Maybe more. In my research preparing for this visit, I have read up on the preservation of Hawaiian culture and values in schools and throughout the islands. I have read about the push for Hawaiian sovereignty and the fight against imperialism that permeates the school system and way of life out here. I see the effects of colonization, not only in the lack of food options, but in the pricing of food, and what is available for purchase out here. I see land occupied by white faces and the houseless families living along the coastline. I see the resistance against this colonization in workshops being led by INPEACE to teach community members how to farm and fish and sustain themselves through the ‘āina. I hear about tensions between Native Kanaka and mainland white folx and local Japanese community members; but in talking with folx locally, a majority of inhabitants in this area consider themselves mixed and don’t play into the tensions in “town.”

These tensions, I would think, would lead to a question of “where do I belong?” but on the coast, the question is put into a statement: “I belong here.” Most of the folx that I have interviewed agree that if you’re from the coast and you live Aloha, you are Hawaiian. Ethnicity doesn’t play a role into your identity because you are of the ‘āina. In schools, this sense of community and togetherness is echoed, especially from teachers for newcomer students. They use their pedagogy and philosophical beliefs around education to bring new students into the fold (and here, new students can mean a student from outside of the country, the mainland, or even from a different part of the island). One teacher used the card game “Speed” to get her local students to interact and play with a newcomer student from China. In this game, language was expressed through numbers and actions. The students taught their classmate how to play through examples and gesticulating to the cards. The new student caught on quickly and ended up winning every hand. This form of inclusion and familiarity through play brought this child into the ‘ohana of the class, and he was accepted as a member of the class rather than an outsider. Now students ask him questions about life back in his home country; his self-made flag hangs proudly on the teacher’s desk along with other flags representing students’ home countries, and his experiences were discussed just as much as any other student that the teacher has this year.

Here, the philosophical belief behind teaching is that every kid can learn so long as they are made a part of the community first. Here, the culture is to establish every classroom as a community or an ‘ohana, with the kumu (teacher) as the parental figure or in the role of an auntie or uncle (depending on the teacher’s age). It is not uncommon for teachers and administrators to refer to their students as “my children” or “my kids.” This familial culture is apparent not only in the classroom with jokes, student asides, and physical touch (hugs, shoulder taps, hair tousling, high-fives) but also in public and outside of school hours. It was not uncommon to be in conversation with a teacher either in a classroom or at Starbucks and have a student approach to ask a question or say aloha or to wave emphatically from the doorway behind me. These familial relationships made the classrooms and public spaces feel like a living room (family room?) where everyone is welcome, everyone can get comfy, and shoes weren’t required.

Let’s talk story and wonder together…

© 2021  The Regents of the University of Colorado, a body corporate. All rights reserved.

Accredited by the Higher Learning Commission. All trademarks are registered property of the University. Used by permission only.

Return to the top of the page
Feedback & Questions