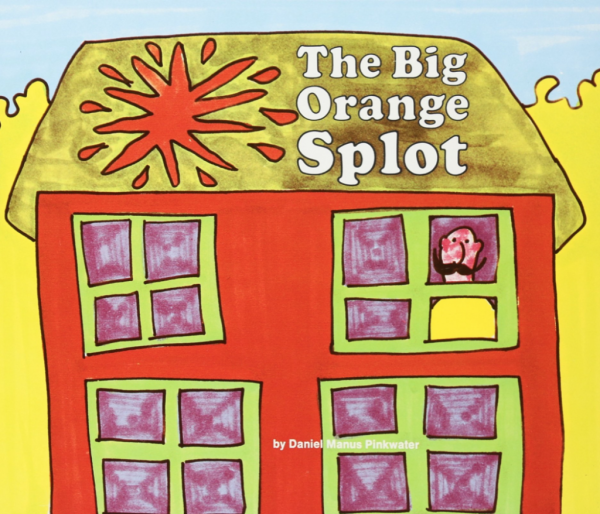 I first joined ThinqStudio in 2019 as a Faculty Fellow. When I applied, I didn’t understand how profound of an impact Thinq would end up having on me. To be honest, at the time, I wasn’t even very clear about what Thinq was or stood for. I had applied because I was angry at higher education and hated how I felt pretending to exist within it. But, something within me told me to pursue an opportunity with ThinqStudio.

I’m a believer that there is an inner child in each of us. Who we are as children is our most unique self and authentic form. Unfortunately, years of societal conditioning slowly disconnects us from our truest self and we get recruited into conforming into an ideal standard. This process is so subtle, we don’t even notice that it’s happening and we forget that a more authentic version of ourselves even exists.

A few years ago, I realized I had lost sight of my inner child when I came across an old copy of my favorite book as a child: The Big Orange Splot. It’s a story about Mr. Plumbean who lives on a neat street where all the houses are the same and everyone fits in. One day, a seagull flew over Mr. Plumbean’s house carrying a can of orange paint and dropped it on his roof leaving a bright orange splot. The neighbors insisted that Plumbean paint over the orange splot to preserve the integrity of their very “neat street.” But the orange splot did something to Mr. Plumbean—it was a catalyst for him to live more authentically in a world of conformity. Instead of painting over the orange splot, Plumbean transformed his home into a colorful and unique demonstration of his deepest dreams. This bold move challenged the norm of the neighborhood that valued predictability and conformity. So, the neighbors took turns talking to Plumbean about his house in an effort to restore the order of their very neat street. But as each neighbor went to talk to Plumbean, he convinced each person to break the mold of conformity in order to express their uniqueness and their own wildest dreams. Soon enough the neighborhood was a colorful and eclectic display of everyone’s inner desires.

As I re-read this book, now as an adult, I can better understand the underlying message. The reason I liked that book so much is because my inner child dislikes status quos and being expected to fit within societal norms.

Thinking back, I remembered who I was as a little girl. I had focus and fierceness on the soccer field but was told I was being “bossy.” I was the one who wore sports clothes and soccer shoes with messy hair and bare nails only to be told to dress more like a girl. I was the little girl who hated dresses and dolls and would rather play with the boys even when playing with girls was the norm. I was the girl who thought poodle skirts were dumb so for the 1950s-themed sock hop school dance, I went dressed as the “dude” wearing jeans, a white t-shirt with rolled up sleeves and slicked back hair. I remembered I was silly, playful, and light hearted and, while I liked to seriously pursue my passions, I never liked to take myself too seriously.

I entered academia to find, what I perceive to be, rigid expectations and unnecessary seriousness. I felt a subtle yet strong message prescribing exactly what I needed to do in order to be considered a serious and rigorous scholar. I quickly realized any slight deviance from that norm was not going to be valued and would threaten my ability to be taken seriously. These messages are hard to prove because they are communicated implicitly. The explicit message, however, is that academia is open, curious, student-centered, and invested in equity, inclusion, creativity, and innovation. The contradictions began to haunt me.

I became angry. I felt devalued. I was drained and uninspired.

Thinq provided a supportive community where I was able to process my anger regarding the often subtle value of conformity and my perception of the lack of vulnerability within teaching. Thinq gave me the support and freedom to dream, which allowed me to pursue my own unique path as an educator. With this freedom, I was able to confidently explore uncommon and misunderstood aspects of teaching such as the use of play in adult learning. Thinq allowed me to tinker, to try, and to risk “failure” as I explored the possibilities of teaching that were never modeled to me and that exist generally outside of the norm. My exploration with play and playful pedagogy has created research opportunities, publications, leadership roles, refined interests and passions, deepened collegial relationships, increased passion, joy, fulfillment, and a new feeling of hope for the longevity of my career. My involvement with Thinq reconnected me with my inner child and encouraged her to color outside of the lines once again.

To put it plainly, ThinqStudio changed me just as the orange splot changed Mr. Plumbean. ThinqStudio has the potential to create an inspiration ripple effect similar to Plumbean sitting down with all his neighbors and slowly convincing each person to break the mold of conformity in order to express their uniqueness and their own wildest dreams. I hope that one day, higher education will be filled with communities and opportunities similar to what ThinqStudio provides. In that case, perhaps soon enough, the neighborhood of academia will be a colorful and eclectic display of everyone’s inner desires challenging the “what is” of academia to open up endless possibilities and “what ifs.”

© 2021  The Regents of the University of Colorado, a body corporate. All rights reserved.

Accredited by the Higher Learning Commission. All trademarks are registered property of the University. Used by permission only.

Return to the top of the page
Feedback & Questions